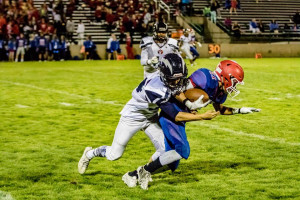 The Blue Blazer football team went on the road Friday night and defeated South Bend Adams 27-20. Senior quarterback Jackson Wiltfong led a balanced attack, throwing for 75 yards and a touchdown while leading the team with 106 rushing yards and one score.

Ricardo Rocha had 64 yards and a touchdown and Dominic Davis added 48 on the ground. Kyran Pearson also had a rushing touchdown as Elkhart Central rushed for 224 yards on the night. 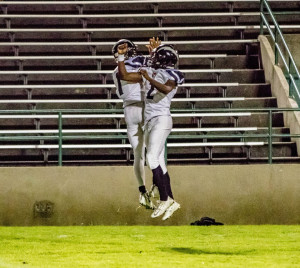 Pearson led the Blazers with 3 catches for 40 yards. Desmond Johnson had a 24-yard touchdown reception in the 4th quarter to cap off the team’s scoring.

Rocha led the defense with 9 tackles, including a sack. Pearson and Derrick Bradberry each picked up sacks as well. The Elkhart Central defense also forced 4 Adams turnovers on interceptions by Bradberry, Pearson, and Rocha, and a fumble recovery by Johnson.

CLICK HERE FOR A PHOTO GALLERY BY DEAN HAINEY!

“We played our first true complete game Friday,” said head coach Josh Shattuck, who picked up his first NIC win. “Our defense forced four turnovers in the first half that resulted in great field position for our offense. It was exciting to see the hard work of the players reflected on the scoreboard.”

Elkhart Central is now 3-4 on the season (1-2 NIC) and will travel to Penn Friday night.