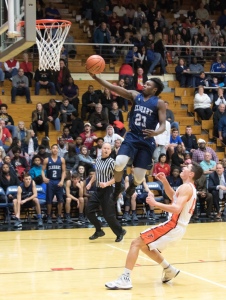 The Elkhart Central Boys Basketball team saw their record-breaking season come to an end last night. Just 48 hours after a physically and emotionally draining triple-overtime win over Penn, the Blue Blazers could not match the same energy, falling to Warsaw 71-36.

Warsaw jumped out to a 16-0 lead and never let off the gas. The Blazers struggled to knock down outside shots throughout the first half and the 32-11 halftime deficit was too much to overcome.

Cornell Conner led the team with 12 points and Adonis Brown added 9. The rest of the scoring was contributed by Trenton Culbreath (5), JT Webb (4), Deveon Jackson (4), Brycen Sherwood (1), and Jacob Kaiser (1).

The team finishes the season with a record of 20-3, despite returning just two regular players from last year’s rotation. Congratulations to our players, coaches, cheerleaders, pep band, student section, and fans on a fantastic season!