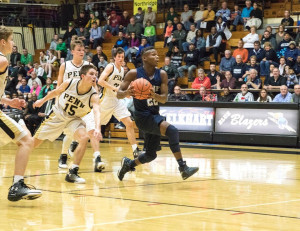 The resilient Elkhart Central Blue Blazers pulled off an amazing comeback to beat Penn in triple-overtime. Cornell Conner’s putback fell through as time expired to seal the deal. Despite trailing by as much as 20 points late in the 3rd quarter, the Blazers were able to defeat the Kingsmen 75-73 to advance to the Sectional semi-finals.

Elkhart outscored Penn 23-8 in the 4th quarter, which is where Adonis Brown scored 11 of his game-high 28, including the tying basket with 8 seconds left in regulation. Penn was able to force double-overtime with a buzzer-beater of their own. Conner’s putback of his own miss was the only points in the third OT which capped off his 23 point-night.

Elkhart Central will play Warsaw Friday night for a chance to advance to Saturday’s championship game. Tickets can be purchased in the ECHS Athletic Office.

Here is a recap of the Blue Blazer scoring: