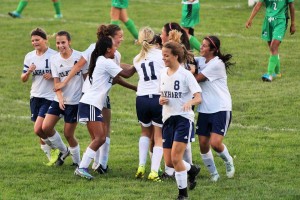 The girls soccer team will have a new soccer coach this Fall.  Jake Meyer was hired last week to take over the team that went 9-5-1 last season.

Meyer is originally from Rapid City, South Dakota.  He played soccer at the University of Mary in Bismark, North Dakota before moving back to South Dakota to begin his teaching career.  It was there that he coached his boys soccer team to a state championship in just his second season.  They were then state runners-up the following year.

Meyer met his returning players yesterday during school and was pleased with the positive energy and attitude of the team.

“I’m excited to jump in head first with the staff and players,” said Meyer.  “I’m very happy for the opportunity to coach at Elkhart Central.”