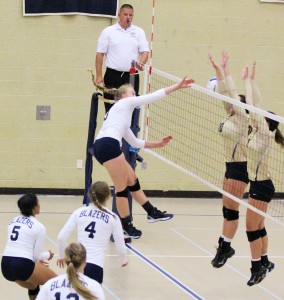 Emily Decker signed with the University of Sioux Falls today to continue her academic and athletic career.  Decker will join a Sioux Falls Cougars Volleyball Team that is currently 17-9 on the season.

Emily will graduate this December from Elkhart Central with a 3.84 GPA and will enroll in classes in Sioux Falls this January.  She plans to major in exercise science and has earned both academic and athletic scholarships from the university.

“Emily is a smart, determined young athlete that has a lot of upside Sioux Falls will be able to tap into,” said Blue Blazer head coach Yolanda Stahl.

After receiving a letter from the team last winter, Emily wrote back to the coach.  They then exchanged phone calls and Emily visited the campus in March and October.  The Deckers visited several schools, but it was the connection that Emily made with the coaching staff that made this decision so easy for her. 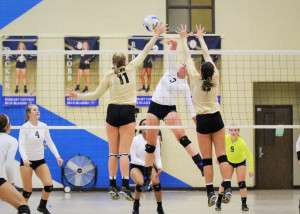 “I like that they have so many team devotions and have a family atmosphere,” said Decker.  “I’m leaving my family in Elkhart but I have a family waiting for me in South Dakota.  Their message was clear–you’re one of us now.”

“Emily is a strong, capable middle blocker with the potential to terminate on the offensive end as well,” said Sioux Falls head volleyball coach, Joel McCartney.  “She has a sharp volleyball IQ which allows her to read the game at a pretty high level.  Emily builds her confidence from the way she works both on and off the floor.  If we’re going to continue to grow our program, we simply need more athletes like her in our gym.”